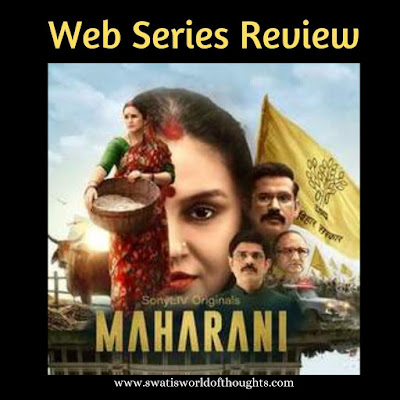 Name of the series : "Maharani"

Maharani is based on interesting phase in Bihar politics, set in the 90's. This was the time when Lalu Prasad Yadav placed his wife Raabri Devi in the Chief Minister's chair, who was illiterate and a homemaker, when he was being tried for the infamous Fodder Scam. Though it is not an exact replica but the premise is similar with some changes to make it look more appealing.

Bihar Chief Minister Bhima Bharti played by  Soham shah is shot and badly wounded by some unknown attackers. To save Chief Minister's position Bhima nominated his wife Rani Bharti played my Huma Qureshi to take his place. It will be fascinating to see how Rani takes on the task of administering the state's politics despite having no formal education or understanding of politics. Everyone thinks of her as quite the damsel, however, she does manages to prove everyone wrong and take her own stand. She soon learns the trick of the trade and in doing so, becomes a threat to her own political regime. What happened when she does that and everything else that follows is what the story narrates. In-party rival Naveen Kumar played by Amit Sial plays the dirty politics to grab the position. Will he be able to achieve his goal is for you to see. This series is based on strong caste-based system placed in Bihar, where lower caste and upper chaste people kill each other for the power.

MY TAKE ON THE SERIES

With this gripping political thriller that emphasizes on the nitty gritty of politics in Patna, Bihar strikes the right cord in most of the places. This series offers a deep look into casteism, corruption, shocking scams, backstabbing and insight into the political structure and law order situation in Bihar, plays out well in most of the part. The narration is well-paced in the first half of episodes, but drags in the later ones.

Maharani is studded with some brilliant cast but they haven't been used to their full potential. It has some very well written impactful dialogues like" Bihar is not a state but a state of mind", and " Mukhiya is not a person, but a dark ideology that grows from the caste system in Bihar."

Huma's character is well written, a strong headed women who doesn't bow down easily not even before her husband. Despite everything happening on the screen, the fact that remains is , this is a man's world is what is given primary importance.

Sohum Shah, as enacted his part with complete conviction, but I feel we have seen better performances from him in past. You fail to understand whether  he is a good guy or a bad guy, his action speaks louder than his words. Amit Sail is impressive as a hardheaded opposition leader Navin Kumar, who is an expert in political manipulation in order to gain power. Kani Kusruti showcased her finest performance, helped Rani to understand her true potential. Innamulhaq as Parvez Alam played his part impressively , who worked closely with Rani and assisting her in uncovering the truth behind the seed scam. Most of the actors get their dialect right, considering Bihari is not an easy dialect to stimulate.

SHOULD YOU WATCH IT?

You can give it a shot, however you might want to pull out in between. But I suggest try it out for the love of political drama and the cast of Maharani, but don't feel disappointed and keep your hopes lower. 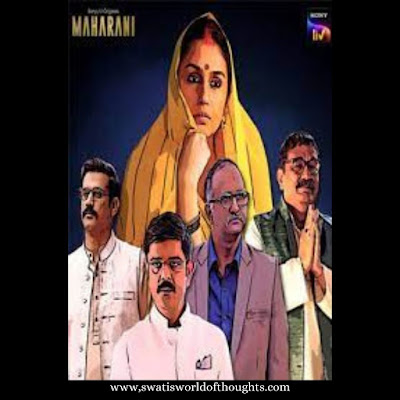