Blochatter's Writfest has gained immense popularity and is back with an impressive line-up of exemplary authors with their revolutionary ideas. It is an online interactive space that brings together authors and readers. The participants, the readers and the followers can catch them live on Facebook. These live sessions will give readers an opportunity not just to listen to these phenomenal authors but can interact with them by asking questions which will be answered on the spot.

Books have been recognized as men's best friend in every corner of the world and literature is being celebrated for the kind of effect it has on our culture. Therefore I think Blogchatter's Writfest is a beautiful initiative and celebration of an art form that not just touches everyone's life but makes it worth living for.

Blogchatter's Tagline "Lets Talk About You" says a lot about their beliefs. So this platform does every thing to uplift the community and society as a whole. As you all know multinational giant Amazon has decided to saw off its Indian publishing arm, Westland Books. Blogchatter has taken a commendable initiative to buy these books from the stores and give them as giveaways.

What is in there for you
How To Be Part of Exclusive Sessions
Themes for the sessions
March 4th : Relatability in Fiction by Meghana Pant, Kiran Manral, Kanchana Banerjee
March 7th : Writing Engaging Stories by Preeti Shenoy
March 11th : Thrilling Your Reader by K Hari Kumar, Chandrima Das, Neil D'Silva
March 21st : Getting Started With Poetry by Sampurna Chaterjee
March 25th : Writing Books That Children Enjoy by Vibha Batra, Akhyrunissa, Vidya Mani 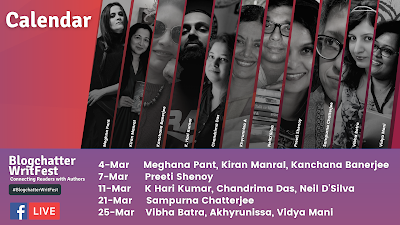 Who are the Authors

Kiran Manral is a writer, author and novelist based in Mumbai. In previous avatars she has been a journalist, researcher, festival curator and entrepreneur. She has received multiple awards and has many published books to her credit.

Kanchana Banerjee is the author of 3 books, A Forgotten Affair, Nobody’s Child and Eye on You. She has been a freelance writer for leading publications and reputed MNCs. Currently, she's a full-time author and lives in Gurgaon with her family.

Preeti Shenoy, among the highest selling authors in India, is on the Forbes longlist of the most influential celebrities in India. Her work has been translated into many Indian languages. Preeti is also a motivational speaker, and has given talks in many premier educational institutions and corporate organisations. An avid fitness enthusiast, she is also an artist specialising in portraiture and illustrated journals.

K. Hari Kumar is a novelist and screenwriter. He is the author of books India's Most Haunted and Dakhma. He is working on a Hindi horror web series for a leading OTT platform and a Malayalam film.

Chandrima Das has had a decade-long career in management consulting that spanned from Wall Street to rural Bihar. She was a SouthAsia Speaks fellow in 2021. Her web-comics and articles have been featured in various publications. She has also performed at live storytelling events. She has written 2 books.

Neil D'Silva has 12 books to his credit with leading publishers. He has won screen adaptation deals on four of his books. He has been named as one of the Top 7 Indian horror writers to be read by UK’s DESIblitz magazine. He is a writing mentor and conducts workshops at prestigious institutions.

Sampurna Chattarji is a writer, translator, editor and teacher with 20 books to her credit. These include a short story collection about Bombay/Mumbai. Her poetry has appeared in Indian and International journals. She has been part of many international poetry translation workshops.

Vibha Batra is an award-winning bestselling author, graphic novelist, advertising consultant, poet, lyricist, translator and creative writing mentor. She has published 19 books. She writes across genres and is the recipient of several honours and awards.

Khyrunnisa A. is an award-winning writer of children’s fiction and also writes for adults. She created the popular comic character Butterfingers for Tinkle and authored the hilarious Butterfingers series of books for older children. Khyrunnisa worked as Associate Professor of English at All Saints’ College, Thiruvananthapuram, and is now a full time writer.

Vidya Mani is a children's writer and editor. Her content and design studio Melting Pot creates children's books and magazines for publishers and NGOs. She is one of the founder-members of Funky Rainbow, a travelling bookshop and book consultancy, committed to bringing books and children together in exciting and innovative ways.

So what are you waiting for, give a big shout out for the most loved and awaited Blogchatter's WritFest. Share the details of sessions on your social media platforms by using hashtag #BlogchatterWritfest, attend, comment, ask a question and be the most engaging participant to win books.