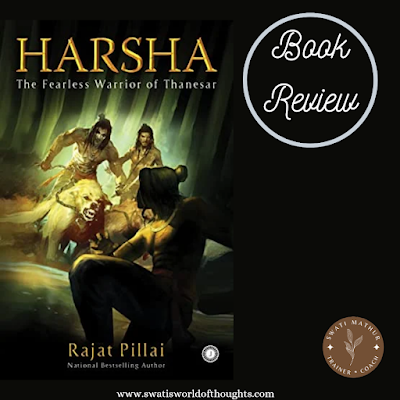 NAME OF THE BOOK: HARSHA: The fearless warrior of Thanesar

NAME OF THE AUTHOR: Rajat Pillai

Rajat Pillai is a Mumbai based software technology architect whose first book Chandragupta was a national bestseller. It was translated into regional languages and the movie rights were acquired by a global production house. He has ventured into different genres with novels like Dead Woman Writing and Yoddha, which have garnered critical acclaims from national media.

The book "Harsha " is about the ruler who was benevolent, energetic, just and active in the administration and prosperity of his empire. After the death of King Prabhakarvardhan and Queen Yasomati of Thanesar, Harsha and his brother had to face unpredictable challenges and animosity. There were series of tragic incidents happened after the death of their parents that had shaped Harsha's personality forever. And the most tragic was Rajvashri, his sister's abduction. At a tender age of 17, Harshvardhan was crowned as the king, who went on to become one of the greatest kings of India with an empire covering most of north India. The biggest challenge faced by him was, to rescue his sister from unfriendly lands and found himself stranded amidst political turmoil, unknown enemies, uncharted regions and altering ego. But despite less experience, his intelligence and self motivation made him the most popular King, whose reign was called as the golden period in Indian history. Harsha's reign was a period of prosperity, benevolence to all the regions, promotion of arts and welfare for the common man.

This book talks about his popularity not just within India but also around the world, especially among chinese travelers who were in awe of the prosperity and welfare enjoyed by the common man during his reign. Amidst of all these turmoil, Harsha was broken from within. But his mission to make Bharatvarsh a welfare state distracted him from the excruciating memories.

He chose to live the kind of life that his brother Rajyavardhan believed in, a life defined not by what one received from the world but by what one gave to the world. Somewhere towards the middle of his reign, Harsha took up Buddhism.

As someone rightly said Fiction is just a fiction for all those readers who cannot relate the story to their reality. The book Harsha is not just a story about the biggest King in Indian history but his story teaches us to survive in today's world. In this elusive world, where things are so erratic with full of drama, suspense and unclear intentions, Harsha shows us the path of how one needs to be focused with an end goal in mind. Only then one can achieve his mission.

Historical fiction connects past and present with extraordinary imagination. I personally feel every book should have some take away which can add value in our present life. And this book has done this effortlessly with praiseworthy imagination by author. The narration is extremely gripping and the credit goes to the author for keeping their readers hooked till the end. As each chapter is short and crisp, it is a quick read and motivates readers to move to the next and probably that helps  in finishing this book in no time. My only advise to the readers is, if you are really interested in period drama, only than opt for such books.