"Marriages are made in Heaven" 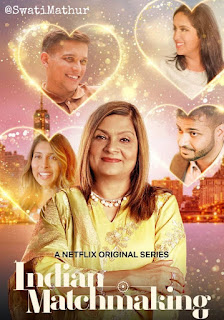 Marriages are scared bond between a man and a woman. According to Indians, this bond is not just between two people but between two families. Indian Matchmaking series is one such program which help individuals finding their life partners. Whether they will be successful in doing so, only time will tell.
Episodes - 8
Seasons - 1
Network - Netflix
Cast - Sima Taparia
Genre - Reality Show
Rating - ✬
Plot
Reality shows are supposed to be unscripted but you can get the feel of staged some times and this is no different. Like any other reality show you can find lot of masala in Indian Matchmaking. Few things are difficult to digest but they are hard reality which still exist in our Hippocratic society. Matchmaker Sima Taparia guides her clients in India and America on arranged match making process armed with bag full of Bio-data's . Most of the clients failed to find partners for themselves and approached her for their last hope. So there are young men and young women who are looking for their life partners through the traditional Indian Style of matchmaking that is  " Arranged Marriage".There are just 8 episodes and nothing concrete has come out.
Review
Indian Matchmaking entails mostly upper class and upper caste stereotypes from Mumbai, Delhi, Udaipur and America but there are some diverse characters too. Every characters has their own idea of marriage. The criteria given by each character is so childish that you will get a feel that- this is the reason why they all are still not settled. Sima reminds you of that annoying relative, who is in a mission to get everyone married and the only advice she has it for everyone is " Compromise" if you really wants to get settled. She also meets a face reader who validates her matchmaking skills.
It is difficult to accept that a Oscar nominated filmmaker Smriti Mundara has created a show where narrative is so scattered that some times it becomes difficult to relate. Many stories go missing abruptly and you won't see any conclusion, that is very disappointing. Though we can relate to many emotions and situations but the demands of these characters makes you feel disgusted sometimes.
Some of the characters like Pradhuman who is obsessed with looks and Arpita who is self obsessed and highly ambitious makes you wonder why do they really want to get married. Most of the characters are not sure what they are really looking in their life partners. She also introduce few of them to Life Skills coach who guides them to be more self aware.
If you really wants to enjoy this show than keep your mind aside and just have fun. Its fun watching their dates and their silly conversations including strange advice given by Sima. Not everyone can relate to this as it completely alienates a large part of young India.
It also makes me wonder how Sima Taparia managed to fly every second day to America, so here we are just focusing on elite upper class and NRI's serviced by another upper class service provider who unabashedly celebrates the most regressive ideas. 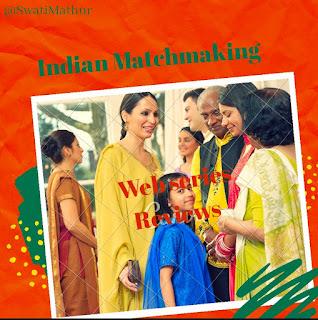