THE ALCHEMIST - A fable about following your dream- Book Review 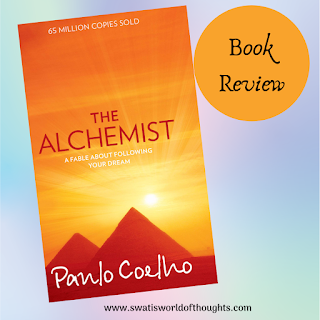 "Tell your heart that the fear of suffering is worse than the suffering itself. And that no heart has ever suffered when it goes in search of its dreams, because every second of the search is a second's encounter with God and with eternity ~ Paulo Coelho
Some books are meant to be read, loved, possessed and passed on. The ALCHEMIST is one of those books. One of the bestseller, wherein 65 MILLION COPIES WERE SOLD WORLD WIDE.
Genre :Fiction /Self Help/Philosophy
Rating : ✬✬✬✬⋆/✬✬✬✬✬

Paulo Coelho was born in Brazil and has become one of the most widely read and loved authors in the world. Especially renowned of The Alchemist and Eleven Minutes, he has sold more than 140 million books worldwide and has been translated into 72 languages. The recipient of numerous prestigious International awards, among them the Crustal Award by the World Economics Forum and France's Legion d'Honneur, Paulo Coelho was inducted into the Brazilian Academy of letters in 2002. He also writes a weekly column syndicated throughout the world.

This is a story of a shepherd boy "Santiago" from the Spanish province of Andalusia who dreams of travelling the world in search of a treasure as desirable as any ever found. He keeps getting the same dream about treasure that are lying in the pyramids of Egypt. From his home he journeys to the exotic markets of North Africa and then into the Egyptian dessert, where a fateful encounter with the Alchemist awaits him. The old man, an Alchemist who Santiago meets in the own square tells him not to believe "the biggest lie" that you cannot control your destiny. You can, he says, but you must 'read the omens', which becomes possible when you start to see the world as one. the world can be read like a book but we will never be able to understand it, if we have a closed existence, complacent and unwilling to risk anything. Throughout the journey, Santiago meets many people and a lot of difficulty which ultimately helps him to learn and grow the entire way. But what starts out as a journey to find worldly goods turns into a discovery of the treasure found within. 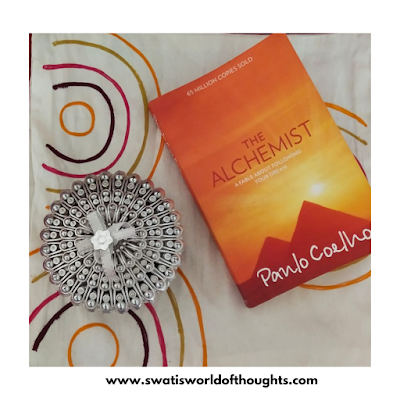 ABOUT THE BOOK
Alchemist is a unforgettable story about the essential wisdom of listening to our heart and above all, following our dreams. Someone who is willing to risk comfort, routine, security and existing relationships to follow something that to other;s looks like a mirage, it takes lot of courage. This book is about hope, belief and how one can convert dream into a reality.
WHAT'S THERE IN IT FOR YOU?
👉 This book teaches you to turn down negative noise in your life.
👉 It emphasis on constant learning, if you want to be a life long learner this book is a must read.
👉 If one is looking for an inspiration, positivity and motivation this book is an apt read.
👉 The book is relatively short having around 167 pages only.

MY FAVORITE QUOTES FROM THE BOOK 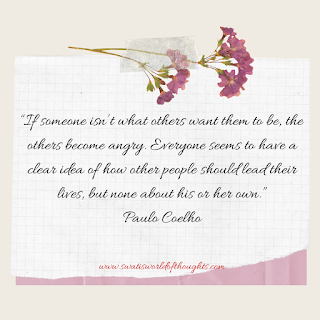 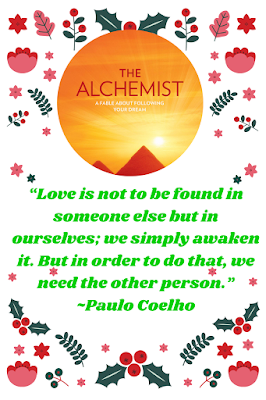 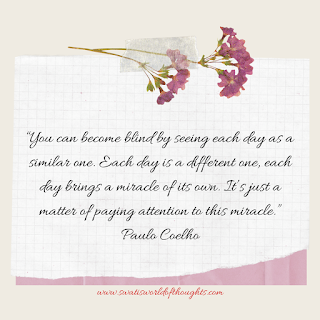 FINAL WORDS
The Alchemist is very enchanting and with optimism which I think is very important in our lives. The author 's choice of works are impeccable and full of wisdom. The book shows that the journey of your destiny is an important as the destiny itself. The book emphasizes on the importance of faith, hope and spirituality through the story of an ordinary boy. I think the book appeal to everyone because we all have dreams and sometimes we just want someone to tell us that they may come true.
Book Information
Paperback - INR 189 (Available on Amazon)
Kindle Edition : INR 75
Pages :167
@SwatiMathur
at November 03, 2020
Labels: BookReview, PauloCoelho, TheAlchemmist